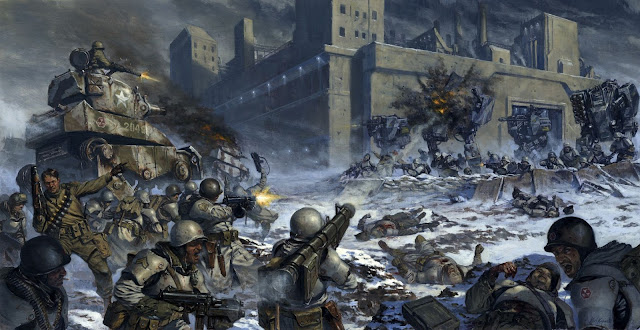 
Dust 1947 is a tabletop miniatures game created by Paolo Parente with rules by Olivier Zamfirescu. The game has been around since 2009 when it started as Dust Tactics. Dust 1947 is the 3rd major edition of the game and it can be played on a grid or freeform movement. The choice is yours.

We are Front 108 are a group of enthusiastic Dust players based in Singapore (but with a global outlook), check us out on Facebook!


Dust - History of the World

Being a brief history and timeline of the world up till 1947.


Allies  - Allies operate as a super bloc under one government. The price of freedom has never been higher.

SSU - The Dragon and the Bear merged into a juggernaut of a world power.

Mercenaries -  Not everyone is aligned with one of the three superpowers. Some see good and profit in neutrality and selling their services to the highest bidder.

Mythos -  The global conflict has awaken something that should not have been disturbed... and it will not rest again.

A list of all Skills used in Dust 1947 including new Skills for campaign play.

Dust 1947 can be played both on the grid and without. Here is our attempt to guide players to Dust in how to play the game in freeform with a few tips sprinkled in.