So the previous dice tray worked well, but an unfortunate incident involving mould consigned it to the trash bin.

Setting out to make a second one I decided I wanted a deeper tray as well as something more square in shape. The depth especially since while the previous one was adequate for small 12mm d6s, bigger dice have a tendency to careen out of the tray, especially in times of excitement (which is often in my games). 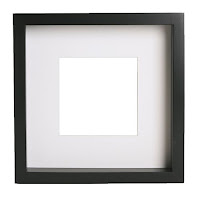 This time I used a deep photo frame, a 25cm square Ribba. It is about 4cm deep and only 9.90SGD at the local Ikea.

Again I used a cork sheet bought from Artfriend sandwiched where the photo would be and viola. Yet another photo dice tray, this time a deep one. Admittedly somewhat large but nice and deep. Great if you need to roll lots of dice.

Total investment this amounts to less than $12. Pretty neat, I like it!