Showing posts from 2009
Show all

Our last session for the year, Tales of Arabian Nights and Pandemic saw the light of day. More photos here: http://www.meetup.com/Boardgames-Singapore/photos/785350/
Post a Comment
Read more

The Making of Avalon Hill's Kingmaker 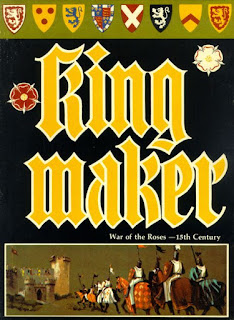 The Making of Avalon Hill's Kingmaker By Andrew McNeil KINGMAKER, the board game for adults based on the political and military activity of the English Wars of the Roses, comes on the market in the autumn of 1974. Copies of the game reach the United States by the end of the year, and by the following summer, with the first edition of the rulebook and a bad review in Games & Puzzles behind it, the game s becoming a cult in some circles. Sufficient numbers of the game appear at Origins 1, America’s leading wargame convention, to prompt SPI, America’s leading wargame publishers, to start importing the game in quantity. Now Avalon Hill steps in. British manufacturers Philmar receive a characteristically scruffy letter from Baltimore. But the content is what counts. Avalon Hill like Kingmaker, they want to manufacture it under licence... now read on... The Avalon Hill Company has a 20-year old reputation in Britain for producing wargames of quality. (Afrika Korps, Bat
Post a Comment
Read more

A milestone of sorts, SOG had its fortieth session. I got to deploy my Shaolin Blood Bowl team after their last game a few years ago, A few more photos here: http://www.meetup.com/Boardgames-Singapore/photos/690806/
Post a Comment
Read more

Attended the first inaugural meetup at Pitstop Cafe. And played Mystery of the Abbey for the first time! Photos are here: http://www.meetup.com/Boardgames-Singapore/photos/549767/
Post a Comment
Read more
More posts