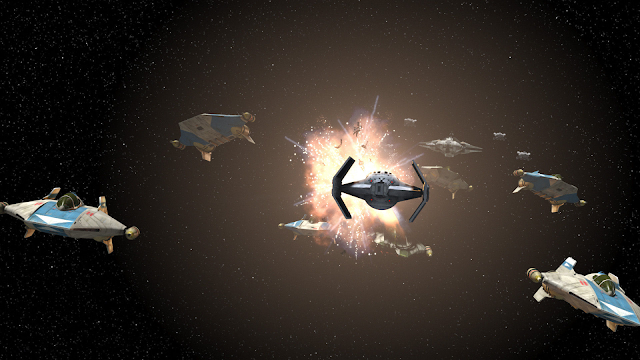 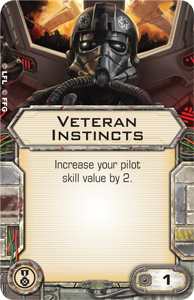 What it does
It helps you win Pilot Skill fights when it matters.
Who wants it
This upgrade is popular with PS8 pilots like Corran and Poe, pushing them to PS10. It so happens that Soontir, Vader and Han are PS9, and it is a great deal being able to beat these arc-dodges. This in turns causes some PS9 pilots to want to take it to prevent the PS8 pilots from beating it. Going up to PS10 guarantees that you can beat the PS9 Soontir Fel, as it would be insane to play Soontir without Push the Limit.
There is one pilot that would always want Veteran Instinct, and that is the Whisper (Phantom). With Advanced Cloaking device, it wants to shoot as early as possible so that it can cloak for the return fire. VI brings Whisper up to PS9, so VI could be the difference between victory and defeat against ships like these.
How good is it
From very good, to useless. Equipping Veteran Instincts is basically a meta-game call. Beating Soontir Fel or Whisper's PS9 is a huge deal. But when faced with a low PS swarm, you wish you had Predator. Take VI over predator if you are PS8. But if you are on a PtL ship, you cannot forgo the power of PtL.
Bonus:
In the 2015 World Championship, all the squads with Poe that finished well had VI.
All except one squad with Corran had VI. (It had Corran with Push the Limit and Engine paired with Poe with VI) 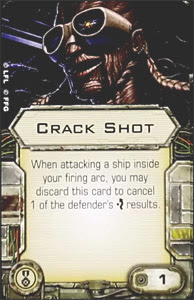 What it does
This is basically a "hull downgrade" for your opponent. Considering hull upgrade costs 3 points, this is good value at only 1 point.
Who wants it
Cheap ships that may not last long. By upgrading the PS1 ship by 2pts, you get a PS3 or 4 ship that also carries an Elite Pilot Skill. You are basically paying 3 pts for the Crack shot (2pts to upgrade your ship, 1pt for Crack Shot). But you get both Crack shot and a higher PS.
Ships that already have slot to equip Fire Control System or K4 Security Droid have free target lock, so they will not need generically awesome Lone Wolf or Predator. If there are no specific synergies, you can't go wrong with Crack Shot as value.
How good is it
This card is the basis of the new style of TIE swarm, allowing low PS swarms to close the game against ships that lean on defense die, tokens or regeneration to survive.
Bonus: Paul Heaver's TC Aces top 4 squad
"Crack Black" by Paul Heaver - Howlrunner. 3x Black Squadron. 2x Omega Squadron. [All 6 ships with Crack Shot]

A list of ships that are good with Crack Shot.

There are a few other elite pilot talents that are only good in a specific combination. One of them is Expose + Decimator + Experimental Interface. Another is Marksmanship or Calculation + Boosk. While these combinations are powerful, they have  certain restrictions or downsides.
Often they aren't that much more powerful than Predator to be worth the downsides. This is the current problem with Outmaneuver. Outmaneuver worse than Predator 90% of the time. Reducing a defense die is as good as rerolling and attack die, (you can do some math or check some simulators). And Outmaneuver is conditional while Predator is not.
Draw the Fire can be a good EPS if you have a particular squishy ship, or if you have Biggs. (Draw the fire is equiped an adjacent ship), preventing the enemy from focusing their fire in a proper manner. Adrenaline Rush allows you to take K-turns or any red manuveurs as white, so it does seem like a better version of Cool Hand.
Understanding these fundamentals will help you put together your own squads when a new wave of ships appear. In a dynamic game like X-wing, there are always exceptions to the fundamentals. Outmaneuver would be a better EPS upgrade than Predator if you are fighting a Falcons after Falcons with C3P0s. Or there could exist a situation where a ship with green sharp-turns does not want to equip PtL. I don't know if that would ever happen, but at least it would give you an informed choice if you choose to go for the alternatives.

And lastly, some tidbits from the upcoming Wave 8. 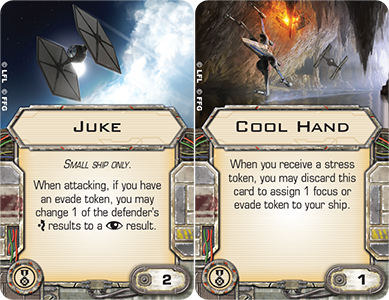 These two new additions from Wave 8 has potential to find a place in the right ships. Cool Hand may be better than Crack Shot in some situations while Juke may be better than Lone Wolf or even Predator in the right context.
Carnox Jax (PtL) + Vader (Juke) in a triple Ace or Palpmobile squadron?
How about Jake (or any A-wing) + PtL + Juke?
Or TIE/FO with Comm Relay & Juke?

May the Force be with you. But more importantly, the dice.