Getting started with squad building can be quite a daunting task with so many options available. But there are certain fundamentals, which, once understood, help you to build your own squad on the back of these fundamentals. It is just like cooking - while there are infinite number of recipes to use and discover, there are some fundamentals of ingredients usage that guides a good chef in his quest for excellence and innovation. In the first article, we will take a look at Elite Pilot Talents.
What ships have the EPT upgrade slot?
Elite Pilot Talents are usually available to most (but not all) named Pilots, commonly known as "Aces". They are also available on some of the more manuverable unnamed pilots ships, like A-wing, T-70, TIE fighters and Interceptors. Slower ships like Y-wing or K-wing do not have an Elite Pilot Skill. The EPT slot is a very valuable slot, and its absence devalues the pilot relative to other pilots of the same ship with the EPT upgrade slot.
Predator
What it does 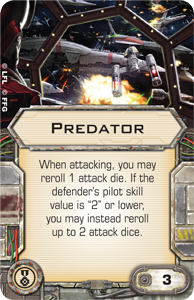 Effectively adds +1 attack die most of the time. Predator is the most generic of elite pilot skills. Any ship would be good with it.
Who wants it
Ships with good survivability, consistently able to get into arch, and preferably with 3-4 attack dice are the prime candidates for Predator. It is most commonly found on Vader, Falcon and Dash.
How good is it
The upcoming Punishing One title adds 1 attack die for 12 pts, and a X-wing costs 9 more points than a z95 just for 1 more attack die and 1 more hull. So this upgrade is easily with 2-3 times its point cost if the ship survives to fight for many rounds.
Bonus: Do you know?Heavy Laser Cannon + Predator (1 reroll) + Focus = 63% chance of 4 hits!

Lone Wolf (LW)
What it does 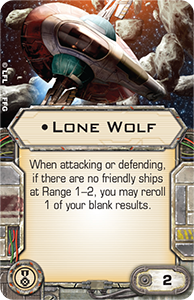 Adds 1 attack and defense die. Lone Wolf is a cheaper, more powerful but more conditional version of Predator.
Who wants it
The choice between Lone Wolf and Predator hinges on how often you expect to trigger it. It has huge value in the late game when you are down to your last ship. Vader and Dash are the two most common ships you expect to find Lone Wolf. Ships like Han with only 1 defense die shouldn't use Lone Wolf. Stick with Predator for a more consistent way to modify you die.
How good is it
In the right list, this card's value is off the charts. But it requires a certain type of list and a certain type of flying. A very good pilot can trigger Lone Wolf 70% of the time on a right list without compromising other aspects of flying.

Bonus: Some observations of using Lone Wolf.
A good pilot can trigger Lone Wolf 70% of the time on a right list without compromising other aspects of flying. 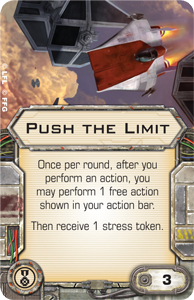 Gives you 2 actions per turn instead of one, at the cost of 1 stress. This effectively means you want to be able to play green maneuvers the next turn.
Who wants it.
Ships with green sharp turn always use Push the Limit. An extra action with little downside is huge. At the moment, only the TIE Interceptor and A-wing have green sharp turns. Hence, you can expect every Interceptor and A-wing pilot will have Push the Limit. It is frequently used with Corran Horn and Dash Rendar, but only in conjunction with Engine Upgrade.
How good is it.

Better than Predator on the right ships. With the option of bends, sharp turns, fast and slow movements available even while stressed, Push the Limit is a must-have on A-Wing and TIE Interceptors. An extra action is worth a lot more than re-rolling a die. While you are unable to K-turn, you can instead do a 2-sharp and then boost for a pseudo K-turn, and you still have your second action available.

Corran and Dash
While Corran and Dash do not have green sharp-turns, PtL is often used on these pilots together with the Engine Upgrade (boost) modification. This gives them additional actions to shoot, evade or arc-dodge while Engine Upgrade makes up for the restrictive green maneuvers. The YT2400 has a particular poor suite of greens maneuvers, but having access to Boost and Barrel Roll on its large base makes up for it. Furthermore, Dash's ability to ignores obstacles mitigates the downside of a restrictive dial.

Bonus: Wave 8 Synergies with PtL.
Wave 8 brings a new ship, the TIE Advance Prototype (Inquisitor), that has green 1-sharps. Following the the principle that ships with green sharps will always want PtL, you can expect PtL to be the among the best Elite Pilot upgrade on it.

On the Rebels side, Kanan Jarrus is a crew upgrade that clears stress using white maneuvers. This may open up the usage of Push the Limit on Falcon or Dash to allow them to continue accessing the entire range of it's maneuver dial when stressed. Will Kanan Jarrus revive the fortunes of the much maligned Millennium Falcon? 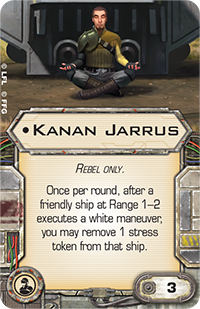 In part 2 we will look at EPT such as Veteran Instincts and Crack Shot. Stay tuned!