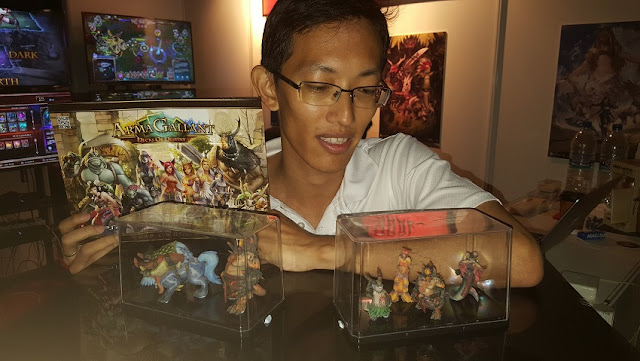 In this edition of GoI we caught up with Dominic Huang, a game designer and maverick. He has run a few kickstarters, is an avid gamer and always on to the next project.

DH: I am a level 42 paladin... okay, okay... I was an entrepreneur who started a restaurant, a chemical business, and an online retail. After selling them for profits, I went on to work in the corporate world that included management level at Lenovo and a Head of Sales at a local IT firm. I recently got a job at Nielsen as a Business Manager. I made great friends in the US who loved my matrix balance skills and brought me into places like Fantasy Flight and Hasbro. I then free lanced my game designing hobby for some of the biggest titles in the industry, including PS4 games and board game conversions like Armagallant and even recently - a PC Steam game called Battle for Empyrean. Watch out for it~! It's really very cool.

What lead you to this less typical career?

DH: On one of my adventures, I found a magic compass. Jack told me it would lead me to the Fountain of Youth... Just kidding. My father who sat on the board of directors and was CEO of several top brands like Kellogg, Nestle etc was the figure of inspiration for me. I wanted to model after him as a good business man, be it corporate or self. His untimely demise to cancer when I was 17 only taught me that no one should ever hold back in life, lest their time be up and they still not unleash their full potential. To be sincere in life is a critical goal. After all, he said, "When you leave this world, make sure it was a better place for having had you." So here I am, living my own corporate dream and passion of game design at the same time.

DH: There are too many to name, but I realize that I understood core mechanics of all types of games very quickly. This made me consider doing game design more seriously, since that hinted at my ability to align with game mechanics. It was proven when my talents were spotted by folks at the world class level. So a big impact in my life is possibly Heroscape, where I met some of the top players in the world, and beat them several times to get world championship. (First ever to attain the title twice, yipee!) Am I still gaming? Yes! All the time! All types of games! I play very competitively and have won tournaments and other mini competitions including fighting games (versus type) like Street Fighter and KOF, FPS games like Quake etc. I am a very competitive gamer, and I believe it helps to hone game designing abilities at the same time.

I understand you tried to launch a game on Kickstarter recently. Tell us about that experience.

DH: Great! The feeling of local folks supporting me is superb! It feels like peeing in your pants. Everyone can see it, but only you can feel the warmth of it. Muahahah~ I am so glad for the tabletop community here in Singapore. Everyone is so genuine in their passion to game and have fun together.

Why do you think it did not meet its funding goal?

I tried to go the dangerous path of gunning for the huge otaku fan base, which dwarves the tabletop community. However, I was not even close to the otaku groups and access was difficult at best. Many of my international designer friends also warned me about it, but YOLO! Let's try it anyway. We could always relaunch. So yes, I learnt now that I should probably do a theme that is more catered towards the tabletop community. The game itself is superb and highly rated by top reviewers in the industry. My friend Lance, also known as Undead Viking, made a statement about the game - "I hate to say things like this, I really do, but this game is a super filler at its finest". So basically it's a theme error as it offended many folks who were sensitive to anime 'sexy' girls.

Tell us about your previous games.

Hitman Holiday was a challenge I took up with the CEO of one of the largest card sleeving companies in the world, who happens to be a good friend. He told me I should just stick with the big boys and earn money that way, and that if I came out on my own, I would probably fail. So to prove that, his challenge was that my first project should be a game that has a strange genre. Hitman Holiday was the answer to that call, since it was a huge group gaming, but yet not a party casual game. It was a strategic game, though not to be taken too seriously at hardcore gaming level. Hitting 20K funding, and then selling more than 2K copies after that, I would like to say I have won that challenge.


What are your future plans or projects?

The next project is still Queen of the Hill, rethemed and to be relaunched in Feb 2016. Back at the international scene, the creators of Good Cop Bad Cop have contacted me and we are looking at possibly collaborating together for this next project. I hope the community will continue to support me so that I can churn out great games for everyone. Another game I am working on is Battle for Empyrean, a PC steam game as I mentioned earlier. You can search it at "B4Egame.com". There is also an interesting new sideline hobby called Purple Meeple and Pink Meeple.

Tell us more about Purple Meeple and Pink Meeple. 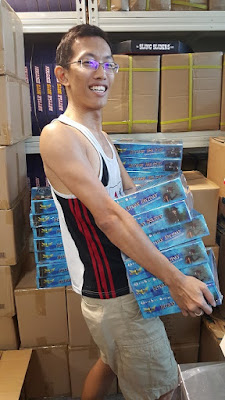 Pink Meeple is inspired by game shows like Korea's Running Man and The Genius. Basically a series of episodes where you have regulars and sometimes guests appearing, to play fun and competitive games together. Over episodes, the audience might come to favor some members more and root for them through the series. I am probably the bad guy in every episode since I win so often it gets boring (bwahahahaha!) We have recently aired our latest Episode 2, which is about Good Cop Bad Cop, in tribute to our designer friends overseas. It's a Christmas special that we filmed to make everyone's Christmas that little bit more special. Do watch it on Youtube if you haven't, it's really funny! With more episodes, hopefully our audience will grow along as well. A lot of effort is put into every filming.

Purple Meeple is where another member of Medieval Lords will be hosting quick and short game review videos with different people now and then, myself included, to give deep insights about the game and whether to buy the game or not. It is set to launch in 2016 as a series as well, but unlike Pink Meeple, it's a lot quicker and does not show the game play. You can stay tuned for more news on it at our Facebook "Medieval Lords" or follow us on Twitter at "@MLordsGames" or even just the website itself at "medievalords.com"

Name three favourite games of yours (excluding your own).

In no specific order:
Amyitis.
Leader 1 Hell of the North.
Kingsburg (with expansion).