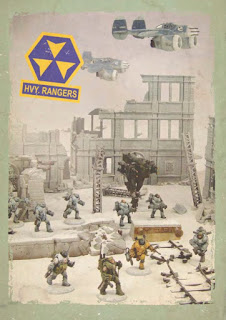 
++++++++++++++++++
PLATOON ADVANTAGE: LIGHTNING STRIKE The Heavy Rangers take the motto "Rangers Lead the Way" to the extreme, often making lightning attacks to surprise their opponents and seizing vital ground before their supporting ground troops are even in position

All Heavy Ranger Units in or supporting a Heavy Ranger Platoon pass their infantry Saves on scores of Army as well as Shield during the first Turn of the game. In addition, if they are held in Reserve they roll one extra die when rolling to arrive on the play area.

It is common to see Heavy Rangers Supported by unusually strong air attacks. Since the Pelican fighter bombers are some of the few pieces of Allied equipment that can move fast enough to keep up. When they need heavier ground support the Heavy Rangers can call on fast armoured units equipped with the M1 series of Light Assault Walkers, Like the phaser-armed Honey Tank destroyer, the short-ranged but lethal Blackhawk, or the always useful Wildfire.