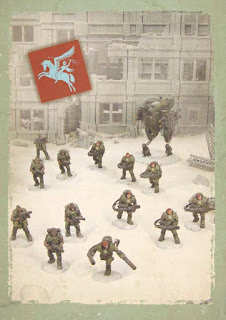 Since the beginning of this war, the British Army has been pioneer in the creation of special or unusual military forces. It has now one of the most important airborne forces on the planet, the largest in the Grand Allied Army, and second only to the Axis Fallschirmjager and Raketentruppe.

PLATOON ADVANTAGE: AIR DROP The humming of planes is the only warning enemy forces will get when the Allied Commandos attack These troops are the best of the best trained to drop in on key objectives and hold them until reinforcements arrive Every Allied Heavy Commando Unit in or Supporting this Platoon gains the Airborne Skill.

Allied airborne forces rely on surprise and shock value to take their objectives, then hold their gains with their phasers and sheer guts. Any support they have needs to be light and airmobile. As a result they favour the M1-series Light Assault Walkers, such as the M1A Wildfire Machine Gun Walker and the M1C Honey Phaser Walker, over heavier models. Air superiority is a priority to protect the Airborne troops as they land. This is usually provided by the Pelican ground-attack Aircraft.
The biggest risk of air-assault operations is that they will be counter-attacked and wiped out before relieved, so it is essential that fast-moving, hard-hitting forces be used to make the link up. That is why the Heavy Rangers usually get this duty.supported by fast M3-series Walkers like the M3C Pounder and M3D Cobra.