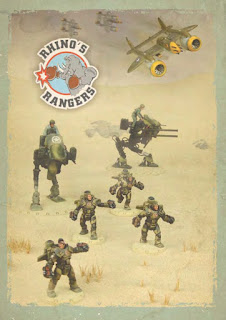 The Allied Taskforce Rhino Platoon is a specialized Heavy Ranger Platoon led by Sergeant Major William Springfield aka "Rhino." When the Allies merged their armies into the Grand Allied Amy. the Rangers became the combined army's elite soldiers.

Fighting all over the world to ensure the final Victory of Freedom and Liberty, the Heavy Rangers are seasoned veterans who have been equipped with and trained to take advantage of the latest power armour in the Allies' arsenal. This armour provides the Rhino and his Heavy Ranger Assault Squads with incredible strength and the ability to Fly over obstacles on the battlefield.

******************
PLATOON ADVANTAGE: KNOCKOUT Rhino's greatest asset is his mobility. Because he seamlessly integrates this asset with his boxing talent, Combat expertise, and armour piercing punches, he can quickly identify a battlefield opportunity to exploit close the distance, and deliver a devastating knockout blow. Rhino personally trained every Unit of Heavy Ranger Assault Squad, passing on this uncanny ability to his protégés
******************

When any Unit in or supporting an Allied Taskforce Rhino Platoon makes a successful Close Combat.Attack against an enemy Unit, the player may select Rhino (as an individual Unit or joined with a Unit) or any Heavy Ranger Assault Squad Unit that is within Range 6 of the enemy Unit. This Unit will Activate immediately after the Attacking Unit has completed its Activation. The unit's first Action must be a March Move Action towards the enemy Unit This Action must be followed by use of the Charge Skill and the resulting Close Combat. Attack must also target the enemy Unit.

SUPPORT UNITS Heavy Rangers rely on speed and striking power to achieve their aims. Supporting Heavy Ranger Attack Squads give the Platoon an additional anti-personnel and ranged combat capability (although many commanders believe that the Platoon already has enough speed and destructive capability with its own rocket punches).

It is common to see Heavy Rangers Supported by unusually strong air attacks since the Pelican fighterbombers are some of the few pieces of Allied equipment that can move fast enough to keep up. When they need heavier ground support that can maintain their incredible pace, the Heavy Rangers can call on fast armored Units equipped with the M1 series of Light Assault Walkers, like the phaser-armed Honey tank destroyer, the short-ranged butllethal Blackhawk, or the always useful Wildfire.