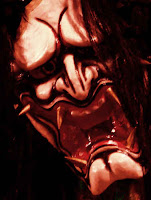 The Great Depression has come to France and the common people are suffering. Our protagonists meet for the first time in Angers. They will find themselves embroiled in strange and dark happenings of the town...


Scene 1 -First Meeting
Where we find Pierre Letreque, itinerant Doctor on government service, Harumi, recently from Japan, dressed in a red Kimono. Father Joseph, a priest of the Church of England. They struck up a conversation in English and explained their respective purposes in Angers. Pierre was here to replenish medical supply and call on his friend Dr Eric Gilbert a local physician. Father Joseph came at the request of Father Andre, a good friend and a local Catholic priest. Harumi said,"sight-seeing".

Father Andre arrived and introductions were made. Harumi accepted the invitation of Father Andre to lodge at quarters on the grounds of the Cathedral of Saint-Maurice where Joseph will be staying as well. Pierre offered to drive everyone up to the Cathedral on his way to Dr Gilbert's resident.

While Pierre dealt with mechanical problems of his motor-vehicle, Father Andre gave hints of strange happenings in Angers. Harumi became interested and suggested she could help. Pierre finally got the vehicle moving and they drove on to the cathedral. 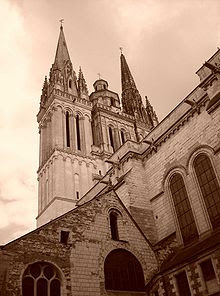 Dropping them off, Pierre continued on to Dr Gilbert's place. Leading the way, Father Andre talked about unexplained disappearances and a mysterious but fatal disease that has afflicted a small number of people Entering a morgue-like chamber they saw the body of one of them, the head of one of the old bourgeois families of Angers, Francois Turgeon. The body was of a sickening colour, with lips and fingers black as if by some form of poison. Harumi pulled out one of her hairpins and pierced the body After studying the hairpin she suggested that something unnatural was at work. Joseph began a ritual to communicate with the spirit of the dead man.

Meanwhile Pierre met up with Eric Gilbert and Eric related something about the strange happenings and asks for Pierre's advise and help. They decided to go back to the Cathedral to examine the body and were directed to where the rest were. They walked in just in time to witness the fruition of Joseph's ritual and a dry rasping sound emanating from the corpse before it fell slient again. Pierre, not quite believing his senses, went forward and examined the body trying to ascertain cause and nature of death. (some sort of cancer/poison?)

Pierre objected to Father Andre's intention to begin funeral preparations as requested by the dead man's family, saying that it was a likely suicide and the gendarmes should be informed. Eric suggested the local police are in cahoots with the rich here in town and unlikely to act on it. Pierre resolved to call the provincial constabulary to see if they could get help from higher authorities. Pierre and Eric left shortly while Harumi and Joseph are shown to their rooms for the night.

Scene 3 - Angers by Night
Back at Eric's place, Pierre called the provincial constabulary but got a frosty response. Wound up by what he saw eariler he paced around his room unable to sleep. Hearing footsteps he looked out his window to see Harumi and Joseph. Calling out to them he learned that they wanted to explore the town by night. He decided to join them and they made their way to the rich district of the town.

In the dark they walked around looking for the Turgeon mansion and were surprised by a gang of men who demanded to know what they were doing. Talks turned to violence as the roughs started beating Joseph, Harumi threw one of her hairpins striking the gate of the mansion they were nearest while Pierre went right up to it to call for help.

A cacophony of sound erupted as dogs started barking and lights came on in the mansion. The roughs stopped their beating as the gate opened. A man-servant stepped through to address the group and then ordered them into the premises. As Father Joseph appeared to be hurt, two of the roughs were ordered to carry him in. As Harumi passed the gate she noticed the letterings, Tergeon

Scene 4 - Meeting Henri Tergeon
Our intrepid three are shown into an antechamber to await the master of the place. Pierre immediately attended to the still moaning Joseph and managed to ascertain that apart from some superficial bruising, he was otherwise fine. He gave him some brandy to calm his nerves; Joseph inexplicably decided to nearly drain the small flask, leading to his rapid intoxication.

Meanwhile Harumi noticed an obviously quite old and valuable painting from Japan hanging on one of the walls.

The same manservant brought them to the study to see Henri Tergeon, a pale looking man in his forties who demanded to know what they doing snooping around at night. Pierre attempted to explain their presence and established their credentials and friendships with Dr Gilbert and Father Andre. Advising them not to wander the streets at night anymore they were dismissed and shown out of the gate.

Between the two of them they managed to support the drunk Joseph back to the Cathedral where tired, they retired to their respective quarters for the night.