Scene 5- The Next Morning
The next morning they reconvened with Father Andre for breakfast. Joseph ate sparingly as he nursed his hangover. Pierre joined them soon and they discussed the events of last night. Pierre advised that Eric has agreed to introduce him to Henri Tergeon under more amicable circumstances. He asked Father Andre to procure a pistol for him and advised the others he will take some sample from the body to a trusted medical facility to have it tested and he should be back by end of the day.

Scene 6a - The Boy
Harumi and Joseph decided to investigate Angers by day and re-traced their steps last night. They stopped in front of Dr Gilbert's residence they ascertained he was not in and slotted in a note asking to see him.

Harumi felt her senses tingling just as a boy of ten or so appeared asking if they were looking for Dr Gilbert and promising to bring them to find him. While suspicious they decided to follow the boy to see where he might lead them.

The boy brought them through winding streets and into a short alleyway ending in a door, opening the door boy went in, came out soon after saying Doctor Gilbert asked them to go in.

Scene 6b
Meanwhile Pierre was at the train station about to buy a ticket when he felt a tug on his sleeve and a boy of about ten brought a message that Dr Gilbert required him urgently. Pierre was brought to a house and advised that Dr Gilbert is inside, Entering, Pierre saw no one but heard sounds from behind a closed door ahead. After calling out and hearing no reply he tried the door to find it locked. Worried that Eric might be hurt and in danger, Pierre took a scalpel in his hand and placed a syringe of morphin in his jacket before kicking the door down and entering.

Suddenly he is accosted from behind, a swift blow to the back of his head renders him unconscious.

Scene 7 - The House
Harumi and Joseph went into the dim interior and hear muffled sounds. Throwing caution to the wind they moved rapidly deeper into the house into a passage where they
hear the muffled sounds coming from a closed door on the other side. Opening the door they saw a large sack on the ground. Untying it they found Pierre alive but bruised around the head. After propping him up, they explained how they came to be here, with Pierre having no recollection after the blow to his head to waking up in the sack. Apart from his medical bag, nothing was missing from his person.

Deciding they should leave as soon as possible, they leave the room only to find the passage out was now a solid wall! Harumi felt strong sorcery at work. She advised that if an exit existed it lied back in the room they came from.

Back there, Harumi quickly identified psychic emanations coming from one wall. Joseph tried a ritual to discern magick but before the ritual was completed Pierre, through trial and error, discovered how the secret exit opened. They saw a passageway leading into pitch darkness. Harumi sensed the emanations from further in.

Scene 8 - Down and Down
Joseph lighted a candle and moved forward with the others following. Seeing a torch of wood nested in by a wall they used that as a light source instead. They moved along the slightly curving passageway which sloped downward very gradually. All the while Harumi sense of the supernatural got stronger.

After some time there was a change in the environment, ahead it appeared to be start of some underground water or sewage system. What water there was was tepid and foul smelling. They needed to stoop to proceed and the path was narrower. Just ahead there appeared to be a passageway on the left. Approaching cautiously Pierre throws the torch into the room. Sensing no motion they entered to see a passageway. Pierre observed that there was a lot of human traffic in the recent past with booted feet moving both forward and back. They proceed further down to a T-junction. Exploring the right they find what appears to be storage area of sort filled with empty crates. Harumi observed the Tergeon emblem on one of the crates. Seeing no exit they proceed the other way. Harumi knew what lay beyond was the source of what tingled her supernatural sense.

Scene 9 - The Oni
A portcullis barred the way further in. Through the portcullis they saw strange hieroglyphs on the floor bound by a large circle that covers most of the floor. Throwing the switch on one side of the wall the portcullis began to rise allowing them to enter. As the light of their torch filled the room they found themselves in a large room with a high ceiling and a doorway with some steps leading up on the opposite corner of the room. The started to walk to the doorway.

There is a sudden drop in temperature and a shimmering form appeared in the middle of the pentagram. Warily the trio observed as the shimmering got larger and more distinct. The figure solidified into what appeared to be a pale looking oriental woman with jet-black hair and white gown who looks straight at Harumi and greeted her in Japanese addressing her as, 'Sister'. Harumi questioned the manifestation who answered her name as Mimi but nothing else.

The rest could understand none of this but Pierre tried to walk out of the circle but found that he could not. The apparition suddenly turned around and started moving towards Pierre and as she did so she took on the form of Pierre's departed wife. Pierre is gripped by strong emotions and is completely entranced. 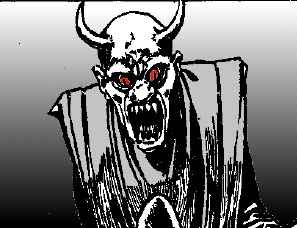 Joseph completed his ritual and they watched in fascinated horror as the woman's skin blackened, limbs elongated and horns started to sprout on the forehead of the creature, soon a demonic 9-feet tall visage looked down upon the trio. Pierre is too shocked to do anything except to stare in horror at the creature. Issuing gutteral sounds the creature turned its attention back to Joseph with malevolent intent in its blood-red eyes.

Harumi could not quite believe she was seeing an Oni, a demon usually bound to certain places in Japan. She drew one of her hairpin and threw it at the Oni who managed to duck it.  'Sister,' it rasped,' leave me the man and I will let you go!' Before Harumi could answer Joseph flung a vial of holy water on the creature, the vial broke splatter it causing where the liquid touched the creature to begin to hiss and blister. Joseph began flipping through his Bible when the creature callously took the book out of his hand and threw it back over its head. With an outstretched hand it grabs Joseph and drew him into its bosom. Joseph nearly fainted from the fetid breath of the creature and his skin crawled against the abhorrent touch of the foul creature.

With its attention focused on Joseph, Harumi somersaulted and pierced the Oni through its eyes with 2 of her hairpins, as the creature howled in pain she placed one more hairpin through its arm holding on to Joseph causing it to loosen its grip. As the creature flailed wildly she flipped behind and place yet another hairpin through the base of its neck. Pierre recovered sufficiently to retrieve Joseph's Bible and helped him loose from the grip of the demon who appeared immoblised.

Harumi told the others she cannot destroy the demon but they discovered they were able to move out of the circle. They did so and went up the flight of steps and further down more steps to reach what appeared to be the sewage system. Going to a nearby manhole Pierre climbed through and the trio moved above ground into the afternoon Sun. They found themselves near a quay at the River Maine. No one appeared to have seen them emerged. Getting their cues they decided to head back to the cathedral to recover from their ordeal.
rpg scenario session