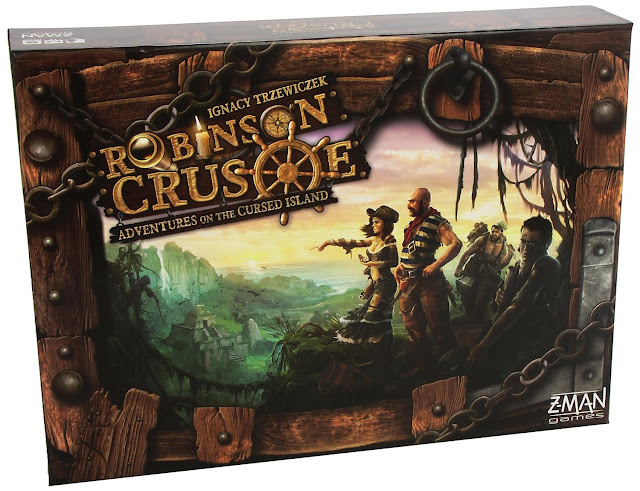 In the November SOG I had a chance to try this co-operative game and here's my first impression.

Robinson Crusoe allows the players to take on the roles of up to four different shipwrecked on an island and basically trying to survive and maybe prosper. It takes about two to three hours to play. Each player/character has different advantages and skills, and they must work together as a team to make sure they achieve their goals, primary of which is not dying to natural disasters or starvation.

Z-Man games has done a nice number on this well produced board game. The map look good, the components are generally good. The cards are more than serviceable.

You typically start out exploring the island, hexagonal tile by hexagonal tile, which is revealed to you as you move along. At the same time, by the end of the day you need food and some kind of shelter. In my game, we discovered trying to accomplish all of this is difficult to say the least. We played the first scenario, and it was brutal. It is most difficult cooperative game I have tried so far. While we played useful sounding roles like Explorer, Carpenter, Soldier and Cook, the reality felt more like we were city-yuppies dropped into a version of the TV series Survivor, where our survival skills are almost non-existent, and just making it alive through a single day, never mind injuries and starving, a triumph.

Despite our many setbacks, me and my fellows kept going and we end up losing one of us to lack of food, after suffering various crippling injuries from fighting off wild beasts or building a tool.

I want to try the game again but this time I will be better prepared, mentally at least. 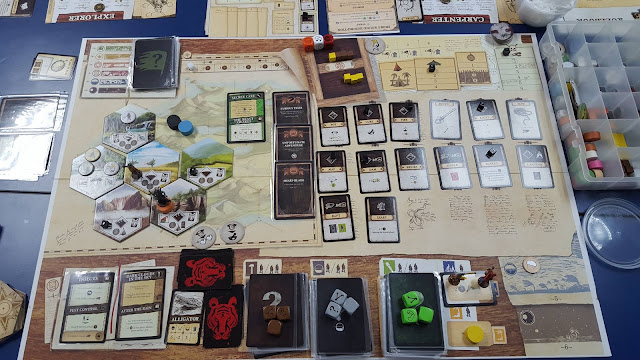