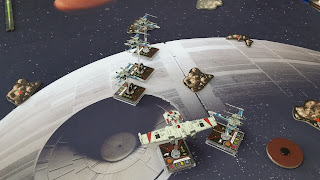 We will have a league champion trophy plus attractive prizes that league members can win. More details on this when we have finalised them!

In conjunction with the league we will also hold the first ever best custom painted X-Wing competition. Look out for details on this soon!

For those who missed the POMO tourney we will organise a special 'make-up' tourney so you dont lose out on number of matches.

All who took part in the POMO Tourney are automatically entered into the 2016 season. To sign up for the league, either take part in the upcoming Bespin Tourney or contact the league organiser Koi Hin for a token registration fee. Closing date is soon so hurry!

The league table can be found here.