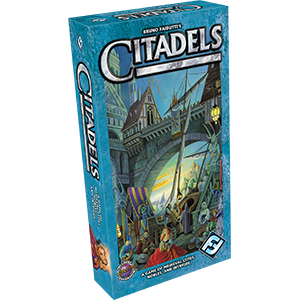 Points are awarded for completing a city, being first to do so, and the value of your districts. Districts are builded by paying for their cost in gold which varies from one to six or more. Each district also has an associated character; more on this later. The gold are represented by nice plastic tokens that look a bit like candies; don't eat them. 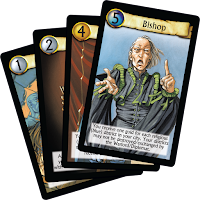 However, what makes the game interesting is the fact that each round of the game, players take turn secretly choosing a different hidden character which gives the player special abilities and colours that correspond to districts allowing to collect more gold.

Since a player's choice is only revealed when the character is called in a defined sequence. With take-that mechanism allowing you to target roles, this makes role selection crucial to the game. There is a fair amount of guessing and double guessing who might choose what, and affecting your strategy for the turn.


Citadels has simple and elegant mechanics, while more advanced players might get bored with it after a while. It still sees plays from time to time and is the perfect one hour game. There are alternative character and special districts cards that bring more flavour to the game. I recommend a variant where you play up to seven districts for slightly faster gameplay. Catch it when you come down to SOG, it is part of our game library.

All images in this post are copyright of Fantasy Flight Games.