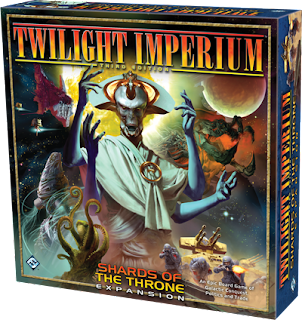 Objective of the GameThe objective of the game is to be the first to accumulate 10 victory points by achieving objectives. Objectives consist of both public and secret ones are varied, most are expansionist in nature, others are about strategic control. Victory points here are an abstract representation of your progress in control and influence in the Twilight Empire. 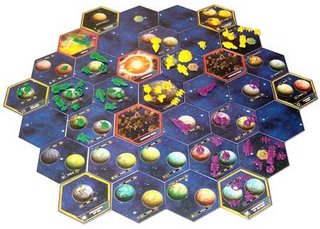 TI3 is played in rounds and each round consists of the following 3 phases:

If after the status phase no player has claimed victory then simply begin with the Strategy Phase again. And thus the game continues until someone wins.

Each of these cards confers a strategy in one area, wise choice of cards is an important part of the game.

The order of play is also determined by the Strategy Cards each have a number. So for example the player with Initiative will go first while he who chose Imperial will go last.

Once everyone has chosen a card, (in the case of a 4 player variant, 2 cards), the Strategy phase is over and you can proceed on to the next phase, the Action Phase.

This concludes Part 1 of my Introduction to the TI3 rules. Part 2 will cover the Action and Status phase.