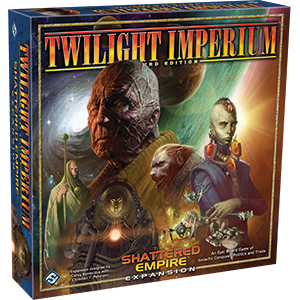 In this next part I describe in some detail the Action Phase, which is where players will spend the bulk of their gaming time. There are four kinds of actions that can be executed:


A player can play #1 to #3 anytime when it is his turn in the Action Phase. Once you have Passed, you may not take any further actions in this phase.

It is during a Tactical Actions that you will move your fleets on the board,engage in space battles, transport your Ground Forces to new planets, build new units, etc. You activate a system by spending a Command Counter. You then strictly follow the sequence here:

Remember you activate a system where you want things to happen. You want your ships in system A to reach system B you activate B, not A. You cannot activate the same system twice.

For a visual picture of this refer to the TI3 rulebook pg 13.

Its a special kind of Action that activates 2 adjacent units and allows you to freely reorganise your fleet between this 2 systems. Note that this 2 systems can only contain yout units (at least one).

You can play an Action Card as an Action.

Lastly if you cannot or do not want to take any more Actions you can Pass. Once everyone has Pass you go on to the...

The Status Phase is easily learned during play so I shall not go into it either.