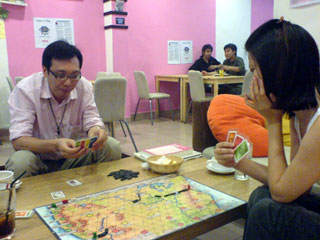 Last Monday I asked Kit Meng and Diana out for dinner at a place called Settler's Cafe at Katong. I meant it as a surprise for Kit Meng whom I perceived was a gamer waiting to come out of the closet. Since I wasn't sure how exposed to games Dia was I chose simple ones.

We started with TransAmerica, the objective was to be the first to link up all your cities with railways. 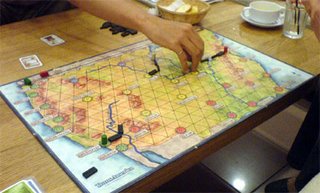 As simple as the game is it has good strategic elements and it helps to have a keen eye as to where your rivals are headed. 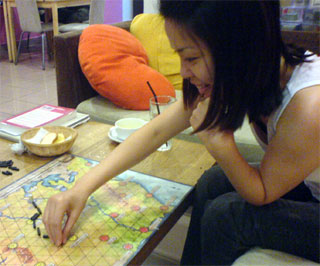 The next game we played was Niagara. Unforunately I was so engrossed playing it I didn't take any pictures! Its actually a great game about collecting gems along the Niagara filled with much excitement as you must be careful not to let your boats go over the falls while looking for opportunities to steal other player's gems. For a seemingly simple game it actually has much depth while remaining very accessible to the whole family. Pushing the river along will definitely be a hit with the kids!
Dia had to leave at this point. Kit Meng and myself tried a 2-player game called Fire and Ice and we both agreed its a great game. Here's some pics of the game and Kit Meng playing it. 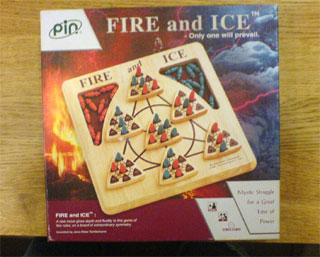 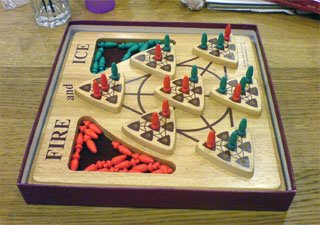 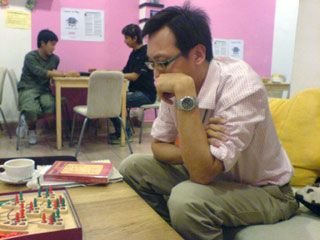 Notice his deep concentration.
All in all we had a good time and Dia wrote to me saying she intends to go back again. I had planned on going in-depth into the games but I am tired so it will have to keep for another day.