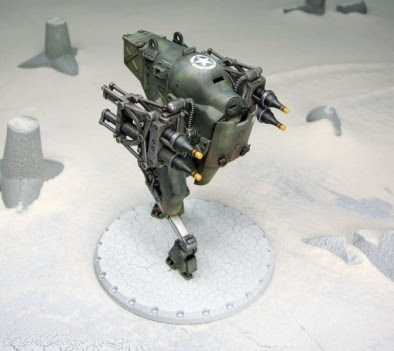 "The Light Assault Walker (LAW) chassis is one of the most commonly found in the grand Allied Army. These vehicles are usually used for reconnaissance mission or flank the enemy while heavier walkers do the heavy lifting. But they can be a potent strike force when deployed in numbers."

LAW pilots are considered slightly unhinged for being willing to go to war in a LAW in the first place; LAW platoons only recruit volunteers. LAWs have often been the saviour of many an infantry company when heavier support was unavailable. Over time veteran LAW pilots become one with their machines, gaining such control over the walkers they could play football with them. The famed LAW platoon, the Hollywood Vipers remains the undefeated champion of unofficial LAW Football League with 11 straight wins.

All LAWs in or supporting this platoon engage in Close-Combat with 2/1 against Infantry only. If they do a Move or March Move they gain an Evade Save until the next time they Activate.