Through the Rocky Mountains 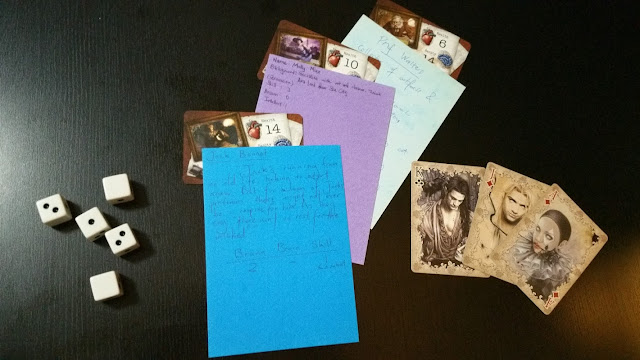 1st day of the new year and how better to start it then with a one-shot horror scenario. Decided to use artwork and elements from FFG excellent series of games based on the Cthulhu Mythos, modified and amended at will to fit my needs.

Winter, 1932. Overnight train ride through the Rocky Mountains to the West. 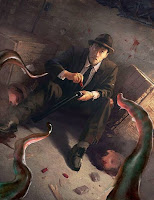 Jack Bennet, a man running from a previous life or maybe the law.

Molly Minx, a socialite and thrill-seeker, but there is more that meets the eye... 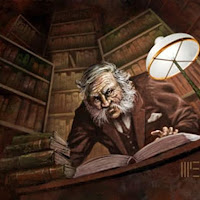 Jack, Molly and Walters become acquainted in the smoking car, as they relax with a bit of drink for the evening. Nearby some men are playing cards, while across two individuals sits alone. One with the look of a preacher or military man dressed in harsh black, and the other a gypsy looking woman.

The woman beckons the trio over and introduces herself as Esmeralda. She offers to read their palms for free, and sees bad futures ahead. She gives a pearl jewelry to Molly as she has taken a shine to her.

Walters talks to man in black, while Jack heads to the bar after losing interest in observing the game. Molly notices a dandy looking gambler (with a really nice moustache) who winks at her, before winning a big hand at the table. Molly keen eyes detects a card switch...

Molly and the dandy, David his name introduce themselves and get a drnk at the bar, the dandy favours Molly with sweet words and affections and she enjoys the attention. Jack scoffs at their flirtations, as they make their way out of the smoking car.

In the short cold space between coaches, David kisses Molly with passion and make his amorous intentions clear. Molly uses the opportunity to deftly remove the palmed card, and deviously bargains with David for both a share of his winnings and his bed. Walters and Jack are almost done for the night and keen to get some sleep as they make their way back to their respective bunks.

Molly and David are warming up each other in the semi-privacy of their berth, and just as Molly's petticoat comes undone, a blood curdling scream is heard far off.

Quickly dressing they come down from the berth to be joined by Walters and Jack who have heard the scream. They decide to investigate...